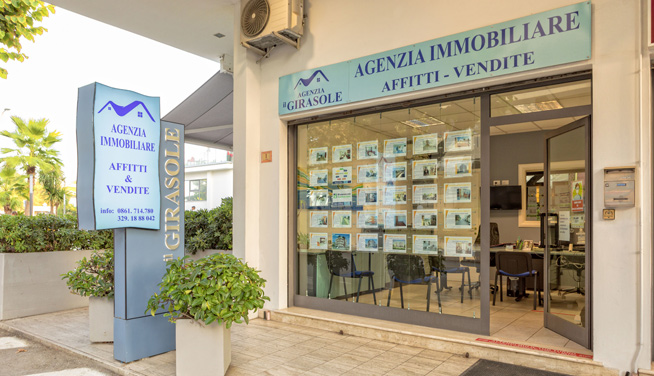 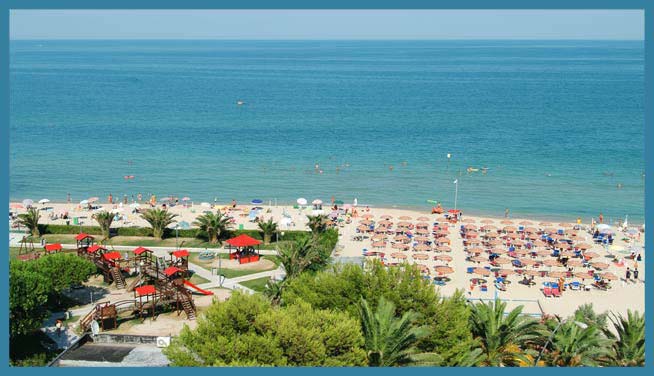 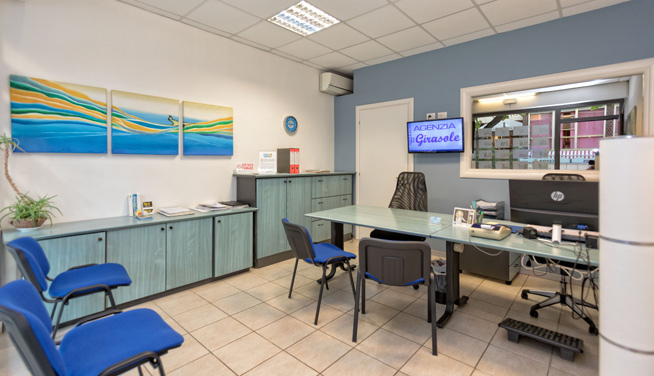 Situated in the north of the Abruzzo region, near the borders to the region Marche, Alba Adriatica is the most known seaside of the coast of northern Abruzzo. Its silver beach and the crystal clear sea satisfy the dreams of every holidaymaker; besides it is the perfect place to spend holidays with children and to relax and young people can have tun at all times of the day.

The clear and sandy shallow water is what you can desire to spend unforgettable holidays: children will enjoy it and you will feel free and at your ease.

To have a stroll an the silver sandy beach or an the waterline with the waves washing your feet softly, to sway in the melody of the waves, to dive in the inviting sea to relax and to recharge one's batteries. You may choose between the equipped or the free and cleaned beaches and the beach beside the luxuriant pinewood, where the delightful smell of the pines will let you live a Mediterranean island atmosphere.

Besides this seaside makes it possible to practice any type of water sport such as sailing, wind surfing and much more with a lot of tun. Those who !ove outdoor sports will enjoy the 25 km long cycling track alongside the sea promenade or in the ups and downs of the green hills.

From Alba Adriatica, situated on the north side of Abruzzo, it is possible to visit a lot of cities very important for the history, art, tradition and architecture.

Corropoli
In the historical centre it is possible to visit the medieval square Piazza Piè di Corte with his charateristic fountain. Near the centre there is the Badia Santa Maria di Mejulano of the year 1000.

Civitella del Tronto
This glamorous and historical city on the Vibrata and Salinello valleys offer you a beautiful view of the Mounts della Laga and Gran Sasso. Famous is her fortress with ramparts of the Bourbons, a truly fortified town; in the centre it is possible to admire the elegant Medieval and Renaissance Houses, and also many churches and historical palaces.

Campli
This town is full of historical and old architectonic monuments with an important necropolis of the Iron Age, and some sepulcres. You can admire the churches of San Nicola and San Francesco (of the year 1300). The build-up area is dominated by the Fortress Balascio grounded around year 1000.

Atri
Was one of the most famous cities in the past. In Piazza Duomo you will discover the Cattedrale dell'Assunta (and the attached Museum with precious relics), the baroque Church Santa Reparata, the Episcopal Palace, Palace Mambelli, the Seminary of the sixteenth century and the City Theatre. Also ancient fountains, squares, churches and "Calanchi" (calanques).

San Gabriele Sanctuary
The Sanctuary has always been the goal of many devouts and can give hospitality to a large structure who can contain 12.000 people, rich of mosaics and granites and is also famous for the beautiful bells concert composed by 14 bronzes.

Castelli
This town rises on the slopes of the Camicia Mount, famous for the estimated artisan pottery wellknown all over the world. Visit the little Church San Donato with the maiolic ceiling (made in the year 1616), which is made with 1000 different bricks.

Wine city
You will discover the landscaped and artistic patrimony, going along the eno-gastronomical routes, like the roads of the seven necks, which permit to appreciate also the cultivations of hills and the typical products, as freshand seasoned cheeses, the oilve oil extravergine , vegetables, and typical pork products from the old working and the greatest wines of Abruzzo like Trebbiano, Cerasuolo and Montepulciano.

National Park Gran Sasso
Civitella del Tronto is one of the stations of departure for the naturalistic excursions in the National Park Gran Sasso and Mounts della Laga, characterised from the rich vegetation and for the presence of great herbivorous like chamois, stag-beetle and roe deer, also predators like the wolf, the wild cat, the beechmarten, king eagle.

Other excursions
From Alba Adriatica it is possible to visit other cities in the region "Marche": Ascoli Piceno, Offida, Ripatransone, Recanati, Sanctuary of Loreto and Frasassi Grotte. Moreover it is be possible to organize excursions to other destinations: L'aquila, Rome, Assisi, Tremiti Islands, San Giovanni Rotondo (Father Pio), National Park of Abruzzo and Massif Maiella.

Il Girasole 1 offers 20 apartments, with swimming pool, solarium, bar and games for kids. It is situated at 400m from the beach of Alba Adriatica...
Go to Website
Home
Profile
Sales
Rents
Summer Rents